From PDF to SAP SmartForms ... Automatically

The reason in short ...
We had planned a banking product for several eligible customers based on an extensive form management in SAP Smartforms. We were facing problems like "only pdf-forms available" or "old pdf-forms should be completely redesigned". For a bank this can mean that hundreds of forms have to be converted... and the time is always short ;-)

Starting this project we knew that the needed new form creation in SAP Smartforms and the insertion of the recent pdf-forms into SAP would be the biggest time-package – not easy to be calculated. We discussed the idea to create a converter to manage at least the simple tasks of converting in an automatic way. 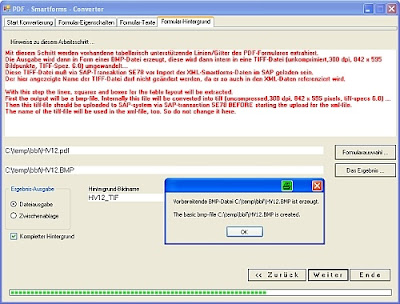 Our basically idea was to extract the pdf-formfield data and properties, insert the data into an xml-structure and using the xml-uploadfunction in Smartforms as the final step. There were forms with less data and a clear structure but also very detailed and overcrowded structures. So we kept in mind that sometimes it would be probably necessary to turn a few screws directly in the converter source. The second part of the work should be the new designed forms. Here we started directly from scratch, creating doc-prototypes with associated technical files containing the formfield-properties. So no existing pdf-form for us. We decided to manage this problem with a different version of the converter. Both converter versions should be developed as a .NET-application. We used C# as ide. 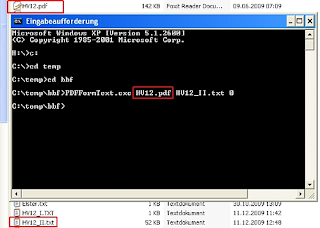 Behind the converter-gui there are batch-modules (developed with Delphi as commandline-tools) doing three jobs for us:
• Extracting the main form-properties like used fonts, the form dimensions, date and time of creation, and so on.
• Extracting all form-fields with name, position values and field-lengths.
• Converting the displayed form content into a tiff-file, regarding the SAP tiff-specifications and the needed dpi-value as a backgoundimage for Smartforms.

The next point was a valid xml-structure to have a look inside. We got it doing a local xml-download of an existing form from Smartforms. We analyzed it, determined the parts which would be always the same and the parts which would be changed programmatically with variable values. We splitted the xml-structure into constant and variable templates. In the templates we signed the significant positions with unique placeholders. Our converter should transform all these things like form properties, field data, reference to the backgroundimage, constant and modified templates as the final step into one new xml-file for the Smartforms-upload.

To prepare Smartforms for the xml-upload first we have to create one single time a formstyle with all possible fontstyles used in the uploaded forms. Another point are the backgroundimages. They are created automatically while generating the upload-xml-structure but the local tiff-files still need to be transported into the SAP Form Graphics Administration (transaction SE78). At this time the referenced link is already in the xml-structure.

At least the converter version for the non-existing forms… In this case the workflow is a bit different. The form properties are already extracted `cause we have the ascii-files with all form- and formfield-properties and bmp- or doc-prototypes. 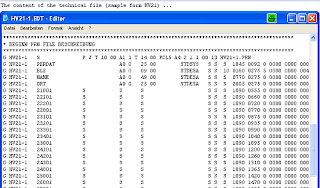 First step is to convert the bmp- or doc-file into the tiff-format according to the SAP specifications. We’re using for this job the free graphic application „Gimp“. Although „Irfan View“ would be a good candidate for this job we should keep in mind that this application is only free for personal use. Then these tiff-files will be transfered into the SAP Form Graphics Administration (transaction SE78), too. Instead of grabbing the form- and field- properties from the pdf-form via commandline-tools the second version of the converter can read the needed data out of these technical ascii-files which come along with the bmp-prototype. At this stage the flow is the same. The xml-file will be created … uploaded …

There’s one restriction: The described procedures concentrates themselves on the main task – creating single-page-forms. Sure it’s possible to enhance the converters for multi-page-forms but in our special case the cost-benefit ratio wouldn’t have a good relationship.

All together we had to convert approximately 300 forms. Normally this work would have lasted 100 days. With our converters we could do this job in less than 10 days!
Eingestellt von Ingo Schmökel um 13:09 Keine Kommentare: